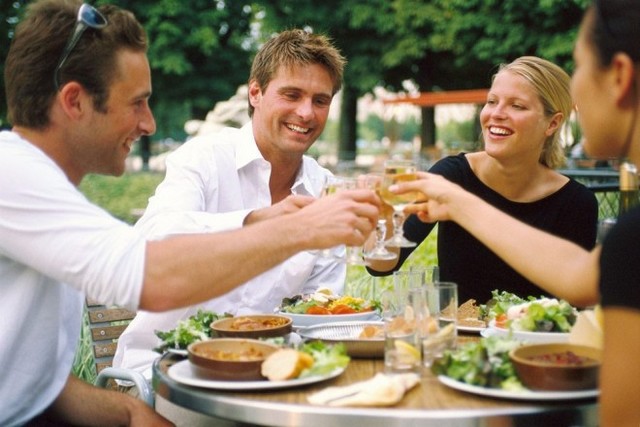 There are plenty of stereotypes donning the world about France and its people, with one of these focussing on their dieting. In short, this is regarded as a much healthier nation, with obesity levels sat at 11% compared to the 33% that the US has.

Bearing this in mind, we have tapped into some of the key dieting principles that the French tend to stick to.

The French aren’t into their snacking

Take a look around most countries, particularly the US, and you will find that snacking is a favorite pastime. Whether it’s at the office, in the car or any other location of your choice, it happens regularly.

The French meanwhile, only eat meals at the table. This is probably the reason they consume, on average at least, around 100 calories less per day than the typical American.

In a lot of countries, wine is something that we tend to guzzle down. In France, this isn’t the case in the slightest.

The French don’t “prepare” for a meal by taking in a couple of glasses beforehand. Instead, they drink whilst eating, while the wine that they do pour tends to only partially fill the glass.

The obvious benefit here is that they severely limit the amount of calories they are consuming, with wine being a bit of a villain in this regard.

Colorful vegetables are completely in

This next point might sound as though it borders on the ridiculous, but give us time. The French are known to opt for colorful vegetables, rather than the bland-looking alternatives.

What’s the reason for this? The likes of beetroot, zucchini and all of those other vibrant foods tend to have more antioxidants in them, which obviously works wonders for the body.

It’s all about portion control

Another reason why the French seem to find it so much easier to stay in shape is because of the portion sizes. In short, they are significantly smaller than what is used to in the US. For example, while a croissant in Paris might be one ounce, if you head over to some cities in the US it’s double the size.

Ultimately, one doesn’t have to be a mathematician to realize the repercussions on your waistline.

There’s no such thing as a buffet

Ok, if you look long and hard enough you might stumble across a buffet, but in general the French are not familiar with the term. All-you-can eat just isn’t a thing, meaning that it becomes much harder to start to pile up the calories on your plate in front of you. Instead, traditional restaurants are more of a thing – meaning that the portions are again consistent.

In the US, a lot of us will wolf down each course without a second thought. Ultimately, there is little time between each one, and little time to digest.

The upshot of the above is that overindulgence is more likely to occur.

As you may have already gathered, this doesn’t occur with the French. Instead, their meals last an eternity, meaning that they will digest their food and start to feel full midway through a meal.

Cheese isn’t all what it’s made out to be

One of the big stereotypes about France is its cheese. However, don’t for a minute think that this is a food which they gobble up as a matter of urgency.

On the contrary, cheese is treated as a “special” food which isn’t turned to at the earliest opportunity. Usually, you will eat it after meals, while it’s also worth pointing out that most French cheeses are actually low in calories when compared to the traditional US versions. We’re referring to the likes of Brie and chevre, mainly.

The French don’t need a car

This next point might be a slight exaggeration, but in general the French rely much less on their cars. Studies have shown that over one third of the time, French people will navigate via walking or bike.

When this is compared to the US, where residents will use their car when they leave home around 84% of the time, this is in stark contrast.

They don’t believe in low-fat treats

While some might swear by low-fat treats, the French don’t fall into this category. They appreciate that many of these foods contain hidden sugar which ultimately, over time, is going to be even worse for them than the fat that they might have saved. Instead, they will simply opt for the real alternative.

The French don’t know about dieting

Finally, despite their size, the French don’t believe in dieting. They don’t tend to measure out portions, and don’t try and balance out the number of carbs, proteins and vegetables on a plate. Instead, they take more of a broader view on the subject. They will try and fill their plate with a variety of foods, without going overboard on one particular food type.